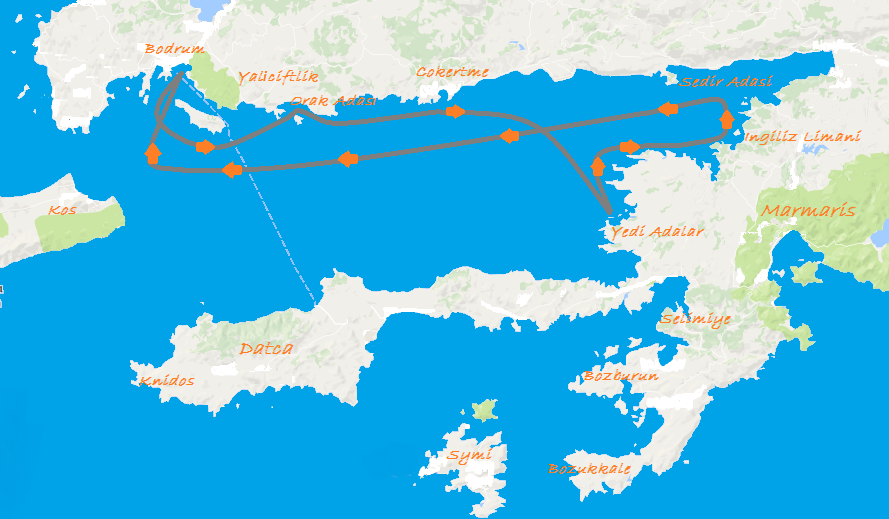 Bodrum – the ancient Halicarnassus, an extremely popular resort is at the north-western end of the gulf. Bodrum has the bohemian marks of the exiled artists and poets who once lived here. And renowned for its nightlife as well!  The castle of St. Peter, built by the knights of St. John, houses the Museum of Underwater Archaeology, reputedly the best in the entire Mediterranean area. Bodrum was also the site of the tomb of Mausolos, one of the seven wonders of the ancient world. Unfortunately nothing remains of the tomb today but from the King’s name were derived the word ‘mausoleum’ which is still in use today. Bodrum is a popular resort for windsurfers with the bay of Bitez and its prevailing winds.

While you may sail directly from Bodrum to Knidos and Tekir cape in the course of your Blue Voyage, it is also possible go ahead by following the bay indented coastline of the gulf of Gokova. Vessels setting out from Bodrum to visit Gokova pass Karaada, famous for its hot springs and known in ancient times as Arkanessos, and then Pabuc Cape and arrive at Kargicik Bay. Before reaching here you will see a small island called Kistak that you may sail past on either side though care must be taken of a reef to its north.

Kargicik is a large and fine bay. Yachts can anchor on its southern side. Taking a swim in this crystal-clear waters is a special pleasure. Before Kargicik Bay is Orak Island on which there are two bays, one on the east and one on the north. The best anchorages are along the northwestern side. Leaving here you pass Karaburun and reach Alakisla Bay before which is Yildiz Island. You should sail close by the island and the mainland. You may anchor off the southwestern tip of the bay. After leaving Alakisla Bay you pass Tekerek Limani, llgin Limani, and Kargili after which you arrive at Cokertme Bay, the best anchorage here. This place is covered with pine and olive trees and is sheltered against the winds.

Leaving Cokertme, you arrive at Camalti Bay, you may visit the ruins of Keramos with the jetty of Oren. Keramos is 48 km from Milas and one can reach it by road as well. The modern town of Keramos is located on the ruins of Keramos. A city of Carian origin, the date of its foundation is unknown though we know of its existence from the 5th Century onward because it was a member of the Delian League. Ruled by the Persians and then Alexander and passed variously through the hands of Rhodes, Rome, and Byzantium. At Keramos today one notices sound city walls’ and their gates remaining from Hellenistic times here and there.

The ancient acropolis was between Mese Kayasi and Camtepe. Outside the village at a place called Bakicak is a marble platform surrounded by a wall. The three blocks visible are all that remains of the foundations of the temple of Zeus Khrsaoreus. There are also ruins of another temple, called Kursunlu today. This temple, located at the foot of the acropolis hill outside the city walls, is in a very ruined state. There are also remains of many Roman and Byzantine buildings at Keramos whose functions can no longer be discerned, though one of them was probably a basilica. On the southern side of the city is a Byzantine church.

There are the remains of a big structure on the east at a place near the city walls. To the south, outside the city are the remains of a many columned structure called “Akyapi” by the villagers today. Outside the city walls is a necropolis and in the cliffs there are rock tombs. Camalti Bay, where the modern jetty is, was the harbor of ancient Keramos. Leaving Oren and proceeding about 10 km past Karaburun, one reaches Akbuk Harbor. Situated at the foot of thickly wooded mountains, Akbuk Harbor is a very good harbor that is sheltered against the western and northwestern winds. There is a cafe and a restaurant here and one may anchor on the jetty before the harbor or else west of it.

From here you may go ahead to Gokova Quay, the extreme end of the gulf of Gokova.  Encircled by emerald-green mountains, you never believe the beauty of Gokova.  Proceeding from here overland to Marmaris, you have a magnificent view of Gokova. Six hundred meters below Sakar rock on the Gokova highway we find the ancient city of Idyma. Descending by means of a winding road, the city walls of the acropolis are visible here and there on the steep slopes. Below them are the remains of a medieval castle. Among the cliffs on the slope one can see rock tombs that resemble temples from the 4th Century B.C. Gasoline and water are available at Gokova jetty and the Forest Administration also has a number of facilities here.

From Gokova jetty you may proceed to Sedir Island, which can also be reached by car. A road that branches off the Marmaris highway comes down to the jetty at the village of Gelibolu and from there you can get to Sedir Island in a rented boat. Boats are also available for rent in Tacbuku. On a hill east of Kizilkaya at the village of Gelibolu is the ancient city of Kallipolis, from which the present-day name of Gelibolu was derived. The ancient and medieval castles here reflect the lengthy past of this region.

At the southern most end of Karaca Harbor, three or four miles from Sedir Island, you come  to Sogut Harbor before which is an island called Karacaada. This pine covered harbor is a place of marvelous beauty. A stream called Incedere discharges into Sogut Harbor and in the mouth of the creek is a jetty. To the east is another jetty. This harbor is connected by road to Marmaris. After leaving this lovely bay surrounded by pine, laurel, oleander, and storax trees, we reach Canak Harbor. This place is enclosed by Andizli Cape and is protected against all winds. After this comes Degirmen Buku, a much-indented bay inside Kara and Zeytinli Islands.

There are many places where yachts may take shelter here. Almost opposite it is another inlet called Ingiliz Limani (“English Harbor”) – According to local tradition, part of the British fleet concealed itself here during World War 1. On the southern side of Degirmen Bay is another anchorage where one may secure some supplies. Drinking water is also plentiful here. Passing Camli and Kormen Islands and leaving Degirmen Buku, we enter Kargili Bay 2.8 miles to the west. After leaving this sheltered inlet, there is a salt lagoon surrounded by pine trees.

There is a light at the mouth of this much-indented inlet, at the far end of which is another wooded lagoon. Between Teke Cape and Taneli Cape are a group of seven islands, hence their Turkish name Yedi Adalar (Seven Islands). While the place is indeed a beautiful one, the numerous reefs here require caution.

Kormen Harbor is about 5 km from Inceburun on which there is a light. There are two artificial harbors here created by breakwaters. Datca is 8 km away. The last calling place in the gulf of Gokova is Mersicik, which is located about 3 km from Mersicik Island. The bay is surrounded by forests.

After leaving here, you go ahead by way of Tekir Buku, Cape Iskandil, and Deve Boynu to the main harbor at Knidos. Thus have completed our tour of the gulf of Gokova. After reaching Knidos, if you wish to continue the Blue Voyage we will go head for the gulf of Hisaronu to see the shores of the Datca peninsula.