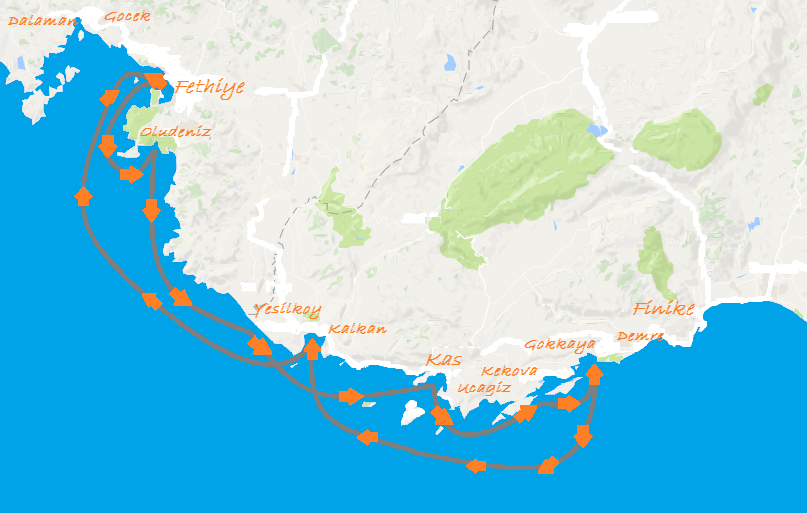 A pleasant bustling town, this is an ideal place to replenish supplies whilst exploring the market and interesting stores. Anchor at one of the surrounding islands before heading East. Above the town of Fethiye (Ancient Telmessus) can be seen several Lycian tombs carved into the rock. 30km from here visit the hidden Valley of Sakli Kent, a beautiful valley with an ancient settlement.

The town is packed with beach resorts, bars and restaurants.  The blue lagoon at Oludeniz is one of the most photographed beaches in the Mediterranean and rated as one of the top 5 in the world.  It has sandy beaches, with a sheltered lagoon, hidden from the open sea.  It is also a nature reserve and building is prohibited here.  The water is infamous at Oludeniz, with shades of turquoise and aquamarine.  Its location next to Mountain Baba Dag makes it a popular place for paragliding, which will give you panoramic views of the bay.

St Nicholas Island, also known as Gemiler Island, is famous for being the supposed resting place of Saint Nicholas or otherwise known as Santa Claus. It is believed that when St Nicholas died in 326 he was buried here on the island before moving remains to Demre due to increased pirate raids. His bones final resting place is in the Italian city of Bari where they were relocated in 1087 by visiting monks. The island is scattered in some impressive ruins well worth the exploration. There are five churches that date back to the 4th and 6th centuries AD along with a large covered walkway that is over 300 metres long. St Nicholas Island is also one of the best spots to sit atop and get to witness one of the most magical sunsets in Turkey.

It is home to the unique Jersey Tiger butterfly. Between June and September, butterflies in thousands of colours and countless varieties can be seen here. This valley is an interesting canyon with steep cliffs up to 350 meters high. This valley is also under protection and has 80 types of butterflies.

Kas is one of the most picturesque and quite stylish ports along the coast. On the hills behind the town can be seen Lycian rock tombs, especially at night when they are floodlit. Kas has a wonderful market. After Kas sail through a chain of islands, some Greek and some Turkish, past Olu Burun, the site of the oldest known shipwreck where Prof. George Bass is still recovering artifacts.

Onshore there are Lycian, Roman, Greek and Byzantine ruins. The gulf of Kekova offers a spectacular place to explore the remains of the sunken city and Lycian tombs, and climb the ruins of the Kekova castle for a breathtaking view over the bay. The maze of islands and bays around this area is unforgettable. It is studded with ancient ruins and one can swim in the large cave.

Sail on to this charming small town harbour. Kalkan was devastated by the same earthquake as Fethiye but the government decided not to repair the houses of the old village but to build an entirely new village above it. In the 1980’s rich entrepreneurs bought up most of the old village and many of the houses have been restored. Visit the ancient sites of Patara, Xanthos and Letoon which are only accessible by road.